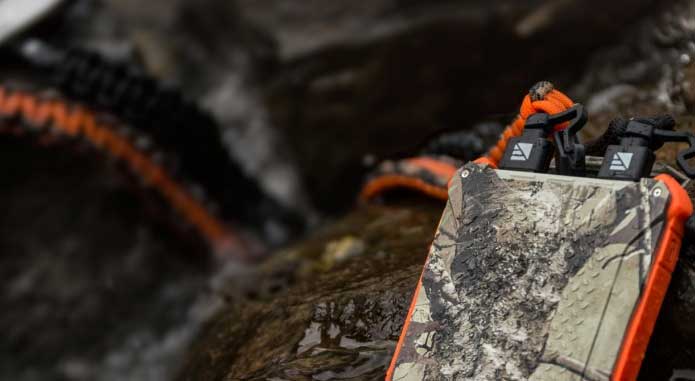 I was recently given the opportunity to try a relatively new charger for small devices, like smart phones, hand held GPS units, action cameras, etc.  I received the unit at the 2016 SHOT Show in Las Vegas this January, a far different environment from the backcountry, which is really what this product was designed for.  However, it came in very handy with the poor wifi in the convention center and my iPhone 6 running low on power mid-day.

I was impressed with the Poseidon right away with the packaging.  It doesn’t come in some flimsy clamshell packaging, but a solid plastic box wrapped on 4 sides with a well-designed, cool-looking, heavy-duty, paperboard covering that closed with a magnet.  The box contains the Poseidon, an aluminum caribiner, black nylon strap and a 2-foot paracord micro-USB cable.  If you have an Apple product, you will need to get the lightening cable sold separately (which I did get).   My unit is the Poseidon “Black” but it is also available in “Realtree”.

Dark Energy promotes the Poseidon as a “Destruction Tested Charger/Light”.  It is military grade drop proof, and waterproof, up to a 4 ft depth for 45 minutes.  Fully charged, it is a charger with a capacity of 10,000 mAh and has the ability to hold a charge for over a year.  Dark Energy claims the unit can charge a smart phone 3-6 times, an action camera 7-9 times and a handheld GPS unit 3-5 times.

When I took it out of the box and turned it on, it had 2 lights on, so about 50% power.  This was plenty of power to fully charge my phone in the afternoon.  I fully charged it the first evening (with the supplied micro-USB) and it took nearly 3 hours to fully charge to 4 lights.  This seemed long, but when it is able to store the amount of power it does, it was understandable.  I would likely plug the unit in to charge overnight anyway, so this really was a non-factor to me.

I used the Poseidon to charge my iPhone 6, iPod Touch and InReach GPS Unit.  Fully charged, the Poseidon charged my iPhone 6 three times (starting at 42%, 27% and 51%) my fully drained iPod Touch and my GPS unit at 33%.   It charged them rapidly as well.  The Poseidon did all of these charges and showed two lights, between 25%- 50% power remaining.

There are several features of the Poseidon I really like.  First of all, it feels bullet-proof.  Both the micro USB and the Lightening cable are 2 feet long and wrapped in 20-feet of paracord.  Not only could this come in useful in a survival situation, it adds to the Poseidon’s cool, rugged appearance.  The cables also have water resistant covers on both ends.  Unlike other small chargers I have used (Mophie, Brunton, inergy Spark), the Poseidon has two USB ports (1.0 and 2.4 amp), allowing you to charge two devices at once.  You can use either USB port and it will not over charge your devices.  It will only supply the amount of charge the device can handle.  The 2.4 amp port will charge more rapidly.  The cover for the two USB ports, charging port and light snaps tightly into place, protecting them against the elements and debris getting inside.  It also has an LED light that can be used to illuminate by pushing the power button once, or an SOS signal if pushed again.

The Poseidon weighs 9.6 ounces, which is heavier than the other units I mentioned (4.35 oz, 8.5 oz, and 5.0oz respectfully).  Although weight on a backcountry hunt is important, so is reliability and durability, and the fact the Poseidon holds twice as much power as comparable units, the extra weight is worth it, in my opinion.  The Poseidon does not have solar panels connected, but it can be charged from a solar unit, but with 10,000 mAh of stored power, it will likely carry me through a backcountry hunt.

The Poseidon’s MSRP is $99.99, which is slightly more expensive than the other units I have used.   But again, the amount of power and durability you get with this unit adds credibility to old saying, “You get what you pay for”.

Overall, this unit is all that it is advertised to be, and I plan on integrating it on my hunts this fall, and anytime I need to consider having a mobile power source.   Be sure to look at Dark Energy’s Poseidon at www.darkenergy.com.  You’ll be glad you did.